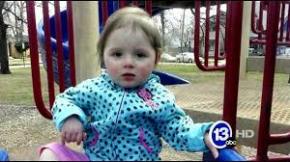 Yesterday the police received a tip regarding the whereabouts of Baby Elaina Steinfurth. Remains have been found in a computer box that was in Angela Steinfurth’s boyfriend’s (Stephen King) garage. The baby went missing on June 1st. The coroner will determine whether this is in fact baby Elaina. Both Steinfurth and King are currently incarcerated.