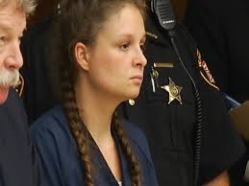 Angela Steinfurth appeared before the grand jury today and was indicted for obstruction (giving false information). After telling the police that baby Elaina was injured and that she did not seek medical help for her, Angela was also charged with Child Endangering. The baby has been missing for over 3 weeks now. A tip to the FBI early last week implied the boyfriend threw the baby against the wall, then put her in bed. When checking on her later she was dead, so Angela and her boyfriend wrapped Elaina in a blanket and threw her in the river (See mu earlier post ‘Baby Elaina Dead?’ for more info. Police spent much of the last week in and around the river searching for the toddler, with no results. Link to full article: